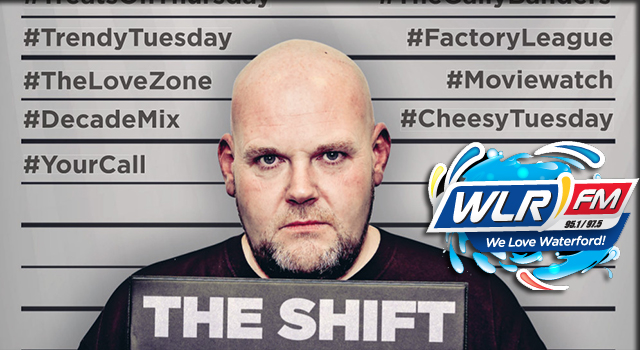 The Promo adverts and Social Media campaign for the show have been running since Jan 1st but the station say that preparations have been on-going since November for the new show, which they expect to be an instant hit with listeners when it hits the airwaves tonight (Monday, January 5th) as they say the move has received a very favourable reaction online.

WLR FM say The Shift will cross decades and genres in a 3-hour journey of good times and good vibes, all picked by Ray C, and giving a feeling of what his 20-year DJing career has been like.

Station management say they have been planning and re-branding the station for the past two years – including a new jingle and imaging package from Wise Buddah, a new website and social media policy, a re-brand of the logo and marketing over the past 12 months.

The station also appointed Michael Byrne as Programme Director last year and has introduced some new talent like Mary O’Neill, Zoe Staunton, Glenn Sheridan, Rod Layman and Mark Graham to the line-up. With Ray C joining WLR FM, this is another move in assuring the station remains attractive in the 25+ Waterford market.

WLR FM’s Programme Director Michael Byrne said: “Ray C is a Waterford man through and through and we couldn’t be happier he’s made this switch to us. Ray has proved himself in the JNLR for many years. We see this as another step forward in our plans, and it’s the listeners and advertisers who will be the clear winners. We can’t wait to get the show on-air.”