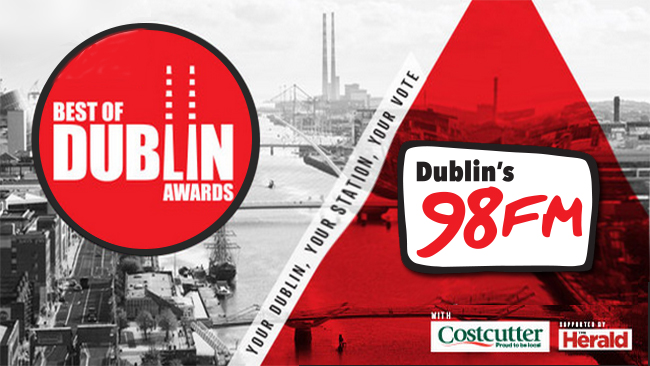 Dublin’s 98FM have announced the return of the ‘Best of Dublin’ awards for their second year.

Nominations are now being taken on the station’s web site for a number of categories, including Best Gig Venue, Best Taxi and Bus Drivers, Best Night Out and Best Dub – which last year was won by Shane Gillece, a die-hard Dublin GAA fan.

The awards, which were first handed out in 2014, were the brainchild of the station’s breakfast host Ray Foley, who himself recently won the Grand Prix at the 2015 Media Awards for his ‘Naked Breakfast’ event.

Presented in association with Costcutter retail stores and supported by the Herald newspaper – the aim of the awards is to celebrate all that’s best about our capital city with listeners nominating and voting for the city’s best hidden gems, people and businesses. Last year’s awards received a staggering 312,000 votes and this year the station aims to bring this to 500,000!

98FM presenter Adrian Kennedy said: “We had a blast with these awards last year and everyone at the station was overwhelmed by the interest and passion people held for their city.  This is a genuine poll by Dubliners; for Dubliners and we’re really looking forward to seeing the votes so if you are proud to be a Dub or know someone that is then we want to hear from you!”

The final nominations for the 2015 awards will be hosted on 98FM.com & will be open to public vote, with the winners being unveiled at a big awards ceremony hosted once again by Adrian Kennedy in Dublin on May 27th where all the nominees will be celebrated.