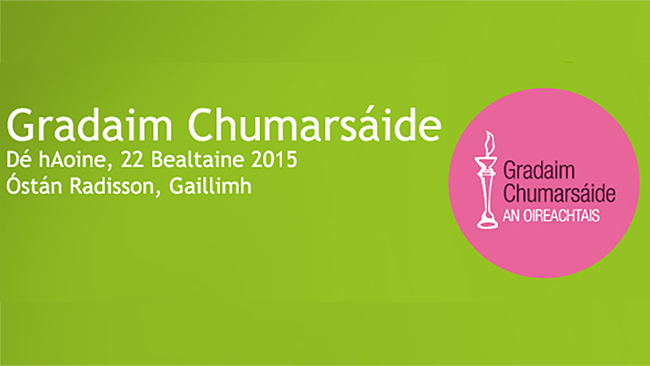 Broadcaster of the Year award for RTÉ RnaG’s Máirín

Máirín is a member of the news team in RnaG HQ in Casla, Connemara, and presents the lunchtime news, Nuacht a hAon, as well as regularly chairing major special broadcasts during elections and referendums.

Máirín hails from Na Forbacha, but has been living in An Cheathrú Rua for many years, where she is married with two daughters. She has a degree in Law and French, as well as a masters degree in European Union politics and law.

Head of RnaG, Edel Ní Chuireáin, said: “It is hard to know where to start when describing the skills of Máirín. She has an encyclopaedic knowledge of politics in this country, and more importantly a deep understanding of it, coupled with extensive experience as a broadcaster. She is, without any doubt, one of the top journalists in this country. This prize has been well-earned and is well-deserved, and I congratulate Máirín on this achievement.”

Aengus Mac Grianna from RTÉ News hosted the Oireachtas Media Awards event in the Radisson Blu Hotel, which celebrated the best work in the Irish language media and honoured the actors, journalists, presenters, programme makers, and others working in the industry.