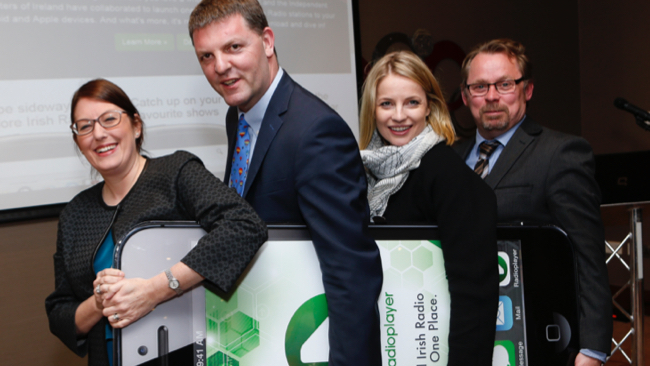  A radio campaign by McCannBlue has helped IrishRadioPlayer get 70k downloads in its first six weeks.

The ads were created by Graham Stewart at McCannBlue and the voiceover artist was Mario Rosenstock.

Scott Williams, Director of the IBI and Paul Mulligan of RTÉ jointly said: “The IrishRadioPlayer is an initiative that the Irish radio industry is justifiably proud of. The Irish audience have a long standing love affair with radio but competition from other aggregators and music streaming providers was growing and we believed an industry wide solution was the best way to tackle the competition.

“The RadioPlayer allows competing radio stations to agree on technology and compete on content. RTÉ Radio and the IBI focused on bringing the advanced technology into the Irish radio sector that would best serve the audience, and with 70,000 downloads in 6 weeks it would seem that the audience loves the IrishRadioPlayer”.

Jessica Mitton, Head of Client Service, who led the team at McCannBlue added: “The Irish radio player app is a brilliant initiative and it was important that we created a campaign that engaged people to take action to download it. Mario Rosenstock really delivered for us and his interpretation of the script made the difference between a good radio ad and a terrific one. We’re delighted with the results and know the app delivers something people really want, particularly young urban commuters.”

The app was created from a partnership of the Independent Broadcasters of Ireland and RTÉ and allows listeners to download all 43 IBI and RTÉ radio stations currently available in the Republic of Ireland.

In the photo, taken at the launch in Dublin, are: Orlaith Blaney, CEO, McCannBlue; John Purcell, Chairman of the IBI and CEO of KCLR 96FM; Jessica Mitton, Head of Client Service, McCannBlue; and, JP Coakley, Director of Operations, RTÉ Radio.