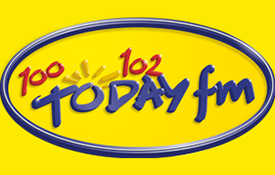 Presenter Ann Gleeson received a warm welcome back to the air by colleagues and listeners at Today FM after time off for cancer treatment.

Listeners were contacting the show via Twitter and Facebook with messages saying how good it is to hear Ann as she appeared with Keith Cunningham on the KC Show.

Ann gained popular status on the station for her slots on the Tom Dunne show, and until last year, The Ray Foley Show, often being referred to as “Assistant Ann”.

Last year she became known for her “Ann Does Ireland!” segment on The Ray Foley Show, which saw her travel Ireland on a weekly basis describing towns and cities in a humorous and satirical manner for Foley’s lunchtime listeners.

In July 2012, she began chemotherapy after being diagnosed with Non-Hodgkin lymphoma.

Did anyone catch the amazing Ann Gleeson on with @KCTodayfm? That's why we do #shaveordye! #takethatcancer

@KCTodayfm Great to hear Ann on air.
My question is can she still burp louder than any man alive today!!?