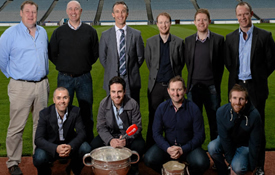 A new sports team at Newstalk has been announced by Ger Gilroy and Dave McIntyre, to join the weekend sport and Off the Ball shows.

Ger Gilroy, Newstalk’s sports editor, said: “The Championship season is one of our favourite periods of the sporting calendar. There’s an excitement and tension you don’t get with other sports and we are looking forward to continuing our work with the best GAA pundits in the business.

“Since we were awarded GAA coverage rights in 2011, we have built an exceptional team of panellists who live and breathe Football and Hurling. Their in-depth knowledge and attention to detail allows us to provide our listeners with the best coverage and ongoing analysis, available.

“Throughout the 2013 season, the Newstalk sports team will deliver match-day commentary with pre and post game dissection, while Off the Ball will tackle the issues that matter, from start to finish.”

Newstalk 106-108 fm have exclusive rights for up to 24 games including two All-Ireland Football quarter finals.

To celebrate Newstalk’s support of the 2013 GAA All-Ireland Championships, ‘Off the Ball’ hosted by Ger Gilroy will be doing five live broadcasts around the country at various different locations commencing in July.

Liam Ó Néill, GAA, said: “Newstalk have become an integral media partner of the GAA and their coverage of our Championship games and GAA in general continues to be of the highest standard. The Association looks forward to continuing this long standing relationship and I wish the GAA team at Newstalk the very best for the 2013 Championships”.

The new team commence their coverage with commentary of Kerry v Tipperary at the Fitzgerald Stadium in Killarney tomorrow (Sunday).