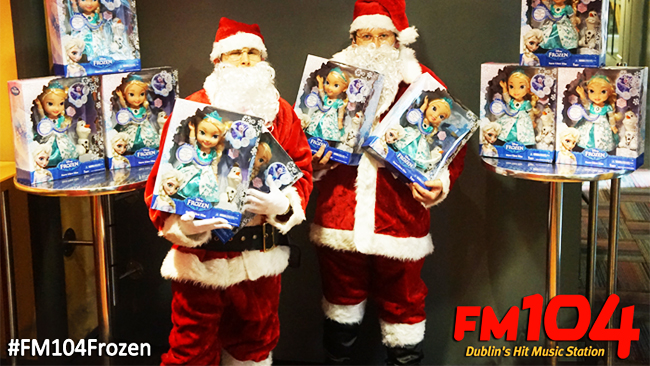 Dublin’s FM104 are giving away one of 2014’s biggest Christmas toys – the hard-to-find “Snow Glow” Elsa doll from the hit Disney movie Frozen.

Disney’s “Snow Glow” Elsa doll – which sings, speaks and lights up – has proven hugely popular among kids this year, with the Phone Show last week discussing how parents had queued overnight outside Smyths Toy Store in Swords, and other toy stores across Dublin.

The lack of availability of the doll – which retails for around €45 – has also caused parents to panic, with Tesco, Toys R Us and Argos all listing it as unavailable in the UK.

Some people have even taken advantage of the shortage in the past week by placing it online on Irish sites such as DoneDeal for up to €500, infuriating parents even further. In fact, at the time of writing, some of the dolls are selling on Ebay.ie for over €1,200 each.

The competition, announced last night on the FM104 Phone Show with Chris Barry, will see the station give away the coveted Disney dolls both on air and via social media.

FM104 are asking people to like and share a status on their Facebook page and enter the competition by answering a simple question on their web site.