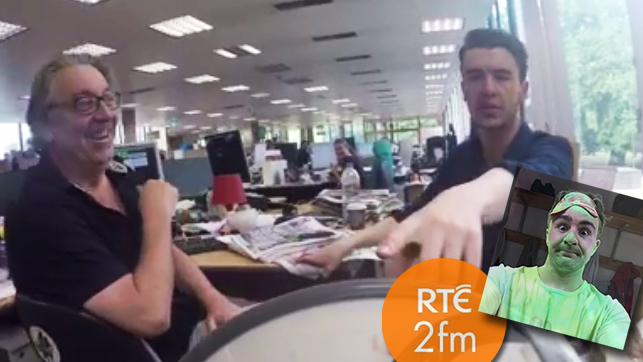 RTÉ 2fm’s Nicky Byrne Show’s “crash test dummy” Carl Mullan pranked the station’s staff around their office and studios with a megaphone and the video evidence is online for all to see.

Carl (pictured, inset above) snuck up on the unsuspecting station staff members with the megaphone, which had a camera mounted on top, and shouted through it to make them jump – with each reacting differently – and posted the resulting video to the 2FM Facebook page.

Comedian Al Porter (top right, above), who currently co-presents with Colm Hayes (left) on 2fm’s “Drive By” was annoyed by the prank, saying “it’s very loud” and asking Carl “were you conscious of the person beside you? You could blow somebody’s ear off!”

Meanwhile, afternoon presenter Rick O’Shea was unflinching and calm, saying to camera “This is the moment when Carl realised that the next time I’m standing behind him, I’m going to push him down a flight of stairs!”.

Carl is sent out by Nicky Byrne and Jenny Greene on a daily basis to carry out pranks and silly tasks in his post as “crash test dummy” for the weekday show. He also presents with RTÉ’s alternative music digital station 2XM.

You can see the video for yourself, below:

Every office needs a megaphone