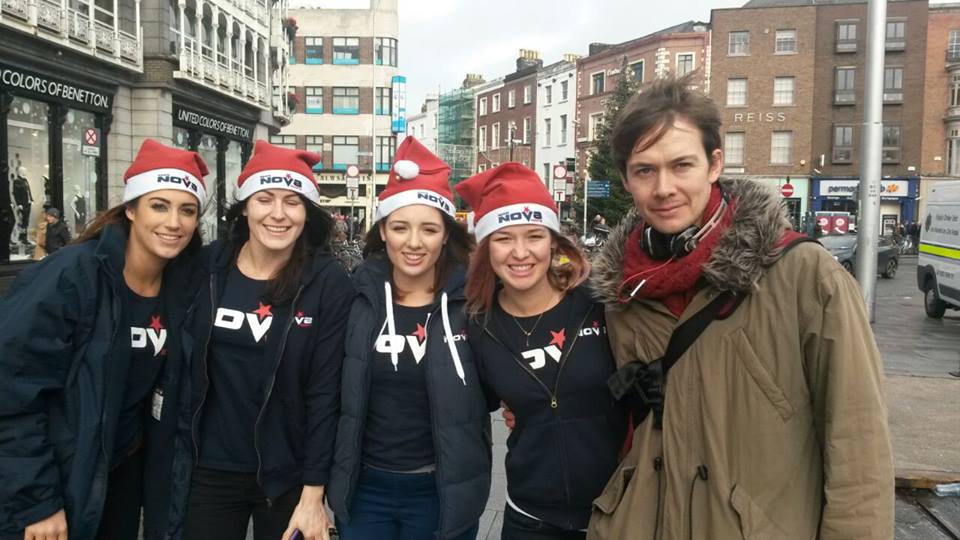 Classic Rock station Radio Nova 100 have given a prize of €5,000 to Noel Mahon – the third and final listener to catch their ‘Secret Santa’ for 2014.

The promotion, which has been running since the beginning of December, featured a member of Nova staff hiding in various locations around the station’s broadcast region and giving out clues on-air regarding their location.

This is the third year that the station have run the Secret Santa promotion, which is sponsored by The Loop at Dublin and Cork Airport.

Previous winners in 2014, Denise from Swords and Paula won a collection of prizes including an electric guitar and amp, B&B hotel stays, photo shoots, gift packs, toys and flying lessons, while Noel Mahon (pictured above with the Nova street team) from Ranelagh – who found the Secret Santa at St. Stephen’s Green in Dublin City Centre – scoops the grand prize of €5,000.

Mahon spoke in studio to Pat Courtenay on Radio Nova at 2:30pm after scooping the Christmas prize, and told him he was an out-of-work photographer who was currently doing some teaching. He said that he must have asked “hundreds of people” the question “Are you the Radio Nova Secret Santa?” before finally finding the real one this morning.

Noel – who Courtenay pointed out had a very appropriate first name for the time of year – added that the win will earn him some much needed brownie points with his girlfriend, who he said would deserve at least some of the prize.

Nova CEO and Programme Director Kevin Branigan said: “This was the biggest year of Secret Santa yet, with hordes of people roaming around town trying to identify him. As well as being great fun, the competition is a key driver of brand awareness and has been a notable success for us over the past three years. Secret Santa has now gone back to the North Pole to plan next year’s campaign, which will have a lot of interesting twists”.