Dublin’s FM104 to give away VW Beetle in “Lock In” 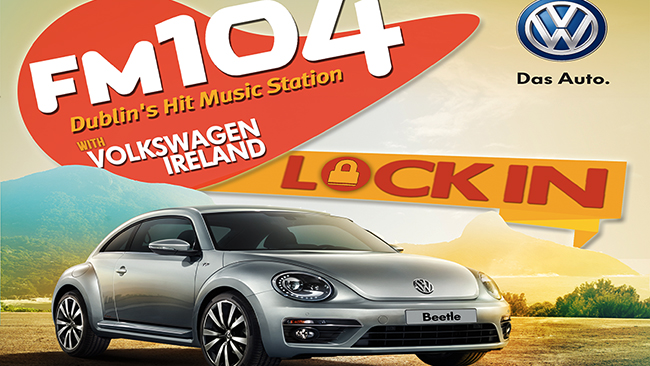 Dublin’s FM104 and Volkswagen Ireland have teamed up for “FM104’s Lock In”, which will see them give away a brand new Volkswagen Beetle.

Each hour from Monday to Thursday, FM104 will play “CarTunes” – where they play 3 snippets of songs to listeners who have responded to a cue to call.

Callers who “break the lock” by correctly guessing the titles of all three songs will go through to the live finals – one on Friday February 20th and the other on Friday February 27th – on breakfast show The Strawberry Alarm Clock, which will result in four finalists going forward to the “Lock In” game.

This game consists of the final four living in the Volkswagen Beetle from 7am to 7pm on the week starting Monday March 2nd, with the public voting via text as to who should stay in the car.

The contestants with the lowest votes will be eliminated at 5:30pm on Wednesday March 4th and Thursday March 5th, and the final two will appear on Friday, March 6th at 9am on the Strawberry Alarm Clock, when the winner will be announced.