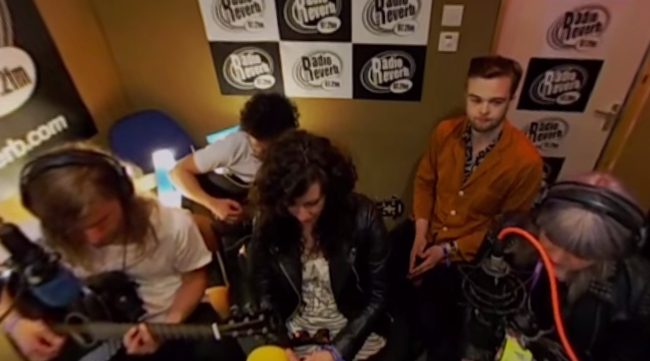 An Irish radio show on a radio station in England is claiming to be the first to publish three music sessions in 360 degree video.

The sessions, with from Irish acts Pleasure Beach, Saint Sister and Stephanie Rainey, were first aired on Monday but videos of the event were published yesterday.

Ant Martin, presenter of What’s The Craic, said: “I had the idea of recording a 360 degree session in the radio studios a few months ago and reached out to the Virtual Reality community here in Brighton including Heather Iriye and Keisuke Suzuki of University of Sussex, to see if it would be possible.

“The response I had was encouraging and really helpful. I met with Sam Watts of make[Real] in Brighton and Tim Fleming of Future Visual who gave a great insight into the technology. The technology to record this special session and to view it has only become mainstream in 2016 so it is the perfect time to push the boundaries and to give people a unique look behind the scenes of our radio station. The video should hopefully put the viewer literally right into the middle of an intimate performance by two amazing acts and for the first time, people will be able to have a proper look around a radio studio and see exactly what goes on.

The timing couldn’t be better really as since only last Monday [16th May] people will now be able to view this experience in virtual reality using the built in Google Cardboard function on YouTube either on their Android or iOS device – no expensive VR device is needed to experience RadioReverb in 360”.