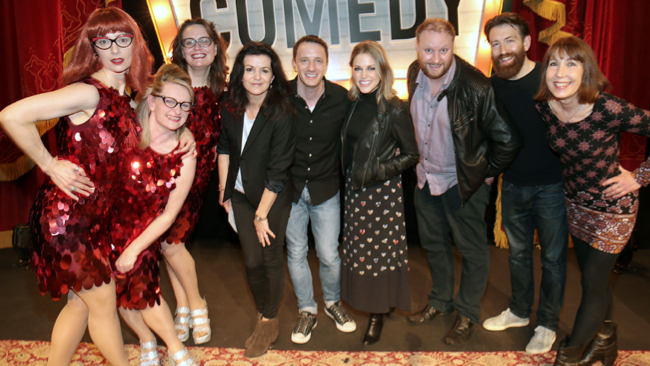 An hour of original comedy will be broadcast on Radio 1 for a six week period, starting Saturday 27th August at 6pm.

The first half hour will feature Don’t Quote Me! – A panel show in which Sean Hughes presides over two teams, headed up by Andrew Maxwell and Fiona Looney, explores and dissects quotes across a wide range of themes, personalities and subjects designed to spark witty commentary, comic discussion and often ridiculous debate.

The second half hour slot, 6.30-7pm, will feature a revolving carousel of programmes.

The series was recorded at the Project Arts Centre earlier in 2016 in front of a live audience, recorded exclusively for RTÉ Radio 1. It has been produced in association with the Broadcasting Authority of Ireland and comedy website grintageireland.com.

Ann-Marie Power, RTÉ Radio 1’s Editor of Music, Entertainment and Comedy, says: “Comedy has proved very popular with RTÉ Radio 1 listeners. Now, building on the success of Callan’s Kicks, Comedy Showhouse Hour is a brand new strand of comedy on Radio 1, offering a full six hours of some of the best Irish comedians and performers over the series. While Callan’s Kicks focuses on political and social satire, Comedy Showhouse Hour offers the audience a different type of laugh, focusing on the personal, the observational and storytelling as well as smart laughs from panel show, Don’t Quote Me. With even more new comedy projects in the pipeline, RTÉ Radio 1 is committed to supporting and developing the comedy sector on-air in Ireland with new, innovative programming for radio.”

Sideline’s Billy McGrath says: “The Comedy Showhouse Hour is the first ever slot dedicated to home-grown comedy on RTE Radio 1 and the station has to be applauded for their initiative and support. Ann-Marie Power and her colleagues have been brilliant and partnering their expertise in radio production and ours in comedy has been a truly positive experience. The fact that the live audiences loved the shows and all the acts enjoyed the experience should be obvious to Radio 1 listeners.”