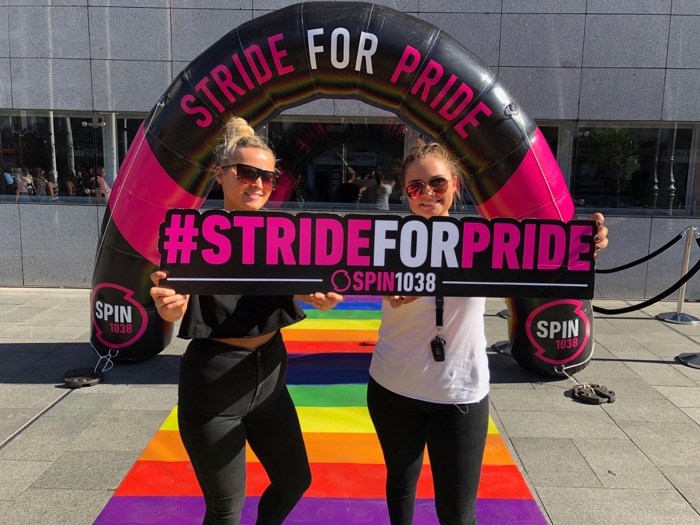 As part of its Official Media Partnership with Dublin LGBTQ Pride, SPIN1038 is encouraging listeners to Stride for Pride to support this year’s Dublin Pride Festival.

SPIN1038’s Stride for Pride activation will feature an inflated archway which will sit over a rainbow-striped carpet. Members of the public will be encouraged to stride down SPIN1038’s rainbow carpet, take a snap at the end and post it to social using #StrideForPride to show their support for Dublin Pride and its mission of celebrating diversity.

Everyone will be encouraged to Stride for Pride with SPIN1038 and celebrate this year’s Dublin Pride Festival.

This year’s Pride takes place from 21st to 30th June with a huge variety of events and festivities planned during the festival which is centred around this year’s festival theme: ‘We Are Family’.

The station also recently hosted the Pride Disco Brunch with plenty of food and drink, 98FM’s own Rebecca Shekleton DJing and drag performances from the George’s Davina Devine and Dolly Grip to entertain the crowd.

SPIN1038 will also be participating in this year’s Parade which will draw Dublin Pride festivities to an end.

The Parade is expected to bring thousands of people into Dublin’s city centre who will walk the parade route from St. Stephen’s Green to Smithfield Square, where the last activation of SPIN1038’s Stride for Pride will take place at the end of the Parade.